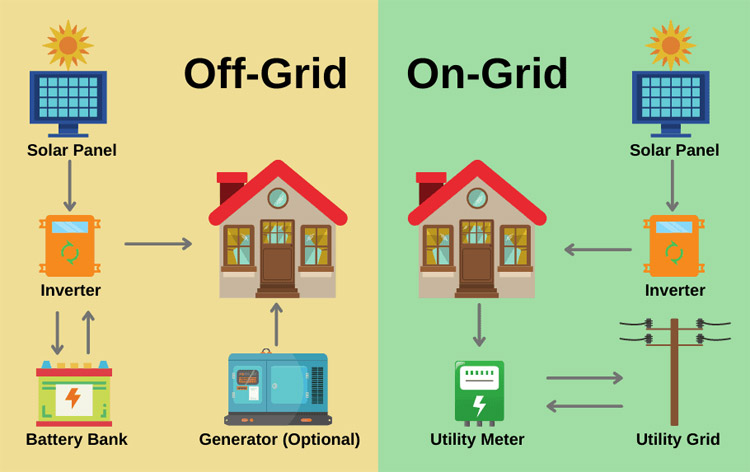 The Major Differences Between Off-Grid and On-Grid Solar Systems. When you think of solar power, you likely imagine large rooftop systems. But, in reality, most people don’t have big roofs or enough sunny exposure to make that kind of investment work.

That’s why small-scale, grid-connected solar is so important right now. In off-grid and on-grid systems, a homeowner has access to electricity from the utility company at some point during the day.

However, they may not have it all day long.

Off-grid systems are often used by remote locations that do not have access to an electrical grid (and cannot get one). On-grid systems are more common in urban and suburban environments where it’s easier for utilities to connect and service individual buildings.

Here’s how these two different types of solar energy system work and what your options are depending on your situation.

What is off-grid solar?

Off-grid systems are solar-powered systems that don’t rely on the utility grid to provide electricity. They work like any other solar system – by capturing the sun and converting it into energy. However, off-grid systems are often used in remote locations or areas without access to a grid. Simple solar power systems for off grid cabins.

Off-grid systems have their own battery banks, inverters, and other components that help them run independently of a power source. These batteries can store excess energy for use later when there is no sun or for cloudy days when there is less sunlight.

What is an on-grid solar system?

An on-grid solar system is a centralized system that uses the electrical grid to generate electricity. Homeowners can purchase panels and wire them to their homes so they are connected to the grid.

The panels are often installed on a rooftop, but they can also be mounted on the ground or placed in more remote locations like a garage or barn.

The homeowner gets all of their electricity from the utility company at some point during the day, but not every single minute of it. If you’re looking for something reliable and steady, this might be your best bet.

How does an on-grid system work?

In an on-grid system, a homeowner connects to the grid and uses power from the utility company. They then have access to electricity all day long.

This is great if you live in a city or suburban area with easy access to utilities and rooftop space. However, it’s more expensive than buying your own solar panels because the builder has to pay for grid connection and maintenance of the panel system.

When should you use an on-grid system?

When you live in a city or town, on-grid solar is the most common type of solar power system.

These systems allow you to connect to the grid and generate electricity as needed. The downside is that they require more maintenance than off-grid systems, since they are directly connected to the electrical grid.

An on-grid system can be used when your property receives direct access to the utility company’s electrical grid. This might only happen five days a week, but it’s more likely that both daytime and nighttime energy needs can be met with an on-grid solar system.

Otherwise, use an off-grid system if your property has no connection to the electrical grid or you don’t want to rely on utilities for day/night power.

Off-grid systems provide 24/7 power without needing service from utilities or any kind of outside help like batteries or generators.

How does an off-grid system work?

Off-grid solar is a system that is not connected to the utility grid. A homeowner with an off-grid system may have access to electricity during certain hours of the day or on some days of the week.

The main difference between off-grid and on-grid systems is how they operate. Off-grid systems are usually battery powered and charge during times when there is sufficient sunlight (usually in the day).

These batteries are then used at night, when there is no sun, to power items like lights, appliances, etc. Off-grid systems can be either stand-alone or connected to a home’s electrical distribution panel (an electric meter).

On-grid solar systems use the power from utility companies to collect energy through rooftop panels and send it back into their local distribution grid.

An off-grid system would need its own electrical connection in order for this to work properly. On top of that, you would need special wiring installed for your walls and roof for an on-grid system.

As we move towards more renewable energy sources, people are turning to off-grid technologies because they are more efficient and cost effective than traditional methods like fossil fuels and nuclear energy.

Off-grid solar systems are often more affordable than on-grid systems. They help you reduce your energy costs by generating electricity at night and during cloudy days when the sun’s not shining.

Off-grid panels can also be installed in areas without grid access, like remote locations or places with poor utility access, so they are an attractive option for those who cannot get a connection to the grid.

If you live in an off-grid system, you will have to use storage batteries to store power generated during daylight hours and discharge it during nighttime hours.

On the other hand, on-grid systems are much easier to install and maintain because they provide constant electricity from their grids. You don’t need storage batteries to supplement your system because it already has a reliable supply of power.

The downside is that there may not be enough natural sunlight for the solar panels to generate electricity during the day, especially if you live in a city or suburb with heavy shade.

These kinds of systems are well suited for locations where there is no grid access or where there is intermittent grid access (like rural locations). In addition, on-grid solar panels require more maintenance than off-grid ones because they’re connected directly to public utilities.

They also have a shorter lifespan than off-grid panels due to lack of natural sunlight exposure and regular electrical stressors (like spikes in demand). On the other hand, these systems lag less in daylight hours and cut down on power consumption at night because

Off-grid solar systems are popular because they offer remote locations the ability to power a home without having to make an investment in costly infrastructure.

This can also be helpful for people who have invested in alternative energy sources, like wind turbines and geothermal systems. But, the downside is that off-grid solar systems come with their own set of disadvantages.

In remote areas, there’s no guarantee that the owners will have a steady source of electricity all day long, which can lead to potential problems with aging batteries or ice blocking panels during cold winter months.

Furthermore, because these homes are often located in remote locations and rely on day-to-day sunshine, these homes are not well equipped for inclement weather or cloudy conditions.

Another disadvantage is that these homes require more maintenance than grid connected solar systems do.

On-grid solar systems are generally larger and more expensive than off-grid systems, but they offer control over the power that you receive.

Off-grid systems do not offer this kind of control, but they are often much cheaper because they don’t require a grid connection and are ideal for off grid living.

Off-grid systems can be as small as a few watts and often cost less than $1,000. In addition to being smaller in size, on-grid solar is also more reliable and efficient.

On-grid systems have warranties that last up to 20 years and an efficiency rate of at least 16 percent on average.

Off-grid systems have a warranty that lasts for 10 years and an average efficiency rate of about 9 percent.

If you’re looking for power outages or unreliable power, it might be worth your time to invest in an off-grid system instead of an on-grid system.

However, if you can own an affordable and reliable solar system with guaranteed power, it may be worth your time to look into an on-grid system instead. Hi and welcome to our blog. We are off grid enthusiasts and prepper researchers. We are a couple who have been living off the grid for many years.

We are constantly learning new ways to become more self sufficient and prepared for whatever may come our way.

We love sharing what we have learned with others and helping them prepare for their own off grid journey.

Thanks for dropping by and hope you enjoy our blog.